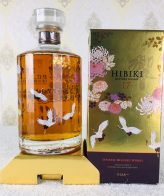 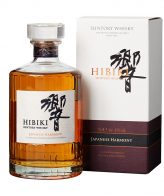 The Hibiki 21 year old lies in the middle of Suntory’s Hibiki line, between the Hibiki 17 Year Old and Hibiki 30 Year Old releases. When blending the whisky the goal is to find harmony, or a delicate balance. This pursuit leads the master blender to choose the best combination of whiskies from across Suntory’s notable distilleries. This has taken centuries to perfect, but the result is a truly world-class bottle.

Finish: Long, with a just a touch of smoke.

Hibiki 21 Year Old has consistently been awarded the World’s best-blended whisky again took home that award in 2017, as well as Supreme Champion Spirit at the ISC ’17.

“Kanzen” or complete, Hibiki Whisky is a harmonious blend of numerous malt and grain whiskies which are meticulously blended to create a full orchestra of flavors and aromas. Seductive, blossoming and enigmatic, Hibiki Japanese Whisky celebrates an unrivalled art of blending, fine craftsmanship and a sense of luxury from the House of Suntory. From the date it launched, Hibiki Whisky has been embraced as the paragon of The Art of Japanese Whisky, the very product of Japanese nature and her people. Hibiki Whisky is not only Japan’s most highly awarded blended whisky, but among the most prestigious and honoured whiskies in the world.